In January 2002, fourteen people attended a meeting at Bill Jenkin’s house on Burma Road, and most of those people became the core of what was later to become the Ramona Valley Vineyard Association (RVVA). There was just one bonded winery and less than 50 small amateur vineyards in Ramona at the time.

Since that time, thanks to the hard work and determination of several association members, many significant events occurred that have contributed to the growth of the wine grape and wine industry, both in Ramona and in all of San Diego County. Ramona Valley was designated an official American Viticultural Area (AVA) in January 2006. In 2010, again after a lot of tenacious effort by association members, the San Diego County zoning ordinance was amended to create a four tier winery structure, commonly referred to as the Boutique Winery Ordinance. Finally, for the first time since prohibition, small wineries were allowed to offer wine tasting to the public without onerous financial regulations.

Since the passage of the ordinance the Ramona Valley has moved steadily forward with more vines and better wines. Today you’ll see hundreds of tiny, small and medium vineyards across the valley and more wineries every year.

The Association continues to focus on community, education, sustainable operation of vineyards and wineries, and taking a leadership role within the San Diego County wine grape industry.

Supporting Ramona Valley’s growth as a premier wine region, the mission statement of the RVVA is to educate wine grape growers and winemakers for successful, sustainable and profitable production of grapes and wine; and to promote and market quality wine to our growing community of wine lovers.

A. Educating policy makers, media and the community on the cultural and economic value of wine grape agriculture and wine production.

B. Taking a leadership role in coalitions and political networks to enhance business opportunities for grapes and wine through San Diego county.

We wonder a lot about the questions: What makes a great wine region? Why should one region expect to make great wine and other’s can hope to make adequate wine? What factors define the world’s best wine regions? And — Does Ramona have any of the right factors to aspire to the highest ranges of the lists?

Eventually it comes down to talented wine makers using wonderful grapes to create top-notch wine. Winemakers are not constrained by geography. They will eventually go where the grapes are, the concept of the ‘flying winemaker’ is not especially surprising.

So what does it take to make really good grapes? The grapes must reach the proper balance of ripeness, acidity, phenolic (flavor) composition and color compounds at precisely the same moment. Those regions of the world where the best grapes grow have many things in common.

The difference of daytime heat to nighttime coolness is significant and consistent throughout the ripening season. Every wine region worth it’s claim to fame has this factor. Without it, it is almost impossible to get proper acidity into the wine without additives. Ramona is blessed with a terrific diurnal shift with our June-gloom marine layer giving way to desert heat almost every day during the summer. We’ve yet to see a Ramona harvest where ‘lack of acid’ has been a problem.

Looking at the great wine regions; some claim limestone; some claim volcanic; some claim shale; some claim granite. There has been a lot of recent research questioning the age-old belief that the soil “gets into the wine and gives it specific character”. Pinot seems to like limestone but some of the favorites don’t grow on limestone, many of them do. What you can see when you examine the regions: the soil is poor, the rocks are mineral rich and gravel is the predominant growing medium. Ramona is blessed with this wonderful, geologically new, decomposed granite that has just (practically yesterday) risen from the depths of the earth. We’ve got minerals and gravel in spades.

The climactic conditions vary the most from region to region. If any one thing determines which varieties will thrive in a region, it is the climate. From Winkler Index 1 (Rhine River, Oregon Coast) to Winkler Index 5 (Lodi, San Joachim, Sicily) the number of heat-hours influences what varieties thrive and what kind of yield targets are plausible. Ramona is blessed with several micro-climates, all of which mirror parts of the Southern Mediterranean sections of Europe. We have seen many varietals thrive here. We are seeing wineries specializing in Bordeaux, Rhone, Italian and Spanish varietals that have produced wonderful wines.

Almost all of the great wine region of the world have significant altitude for their best sectors. (Bordeaux is clearly the exception.) Altitude allows air movement. Altitude enhances diurnal shift. Altitude usually means decomposing young mountains. Altitude provides sunshine which is more intense. Ramona is one of the highest altitude wine regions in the world. Five hundred meters above sea level is generally considered a limit. We extend quite a bit above that. Ramona’s altitude makes the “Valley of the Sun” more than just a Chamber of Commerce slogan. I think this is a big advantage for us.

The exposure to sunshine on a consistent basis allows the grapes to ripen regularly and surely. The difference between Chianti and Montalcino; between Burgundy and Beaujolais; between Cotes du Rhone and Languedoc is the sunshine available. The place where the grapes ripen consistently makes the best wine, year after year. Ramona has all the factors listed above: which put it in a climate class with Southern France, Spain or Tuscany; yet Ramona has the sunshine of Tunisia – seven hundred miles south of those regions. Again, it is hard to remember a harvest in Ramona where the grapes did not reach the sugar level targeted by the winemaker, with acids intact. When grapes reach 24.5 brix in Tuscany, that is considered a 5 star vintage and Reserve wines are expected. We achieve 24.5 brix on a regular basis.

If everything else is perfect for a wine region they are at the mercy of the water delivery system. Water has to arrive in sufficient quantities to maintain vine growth, yet NEVER arrive when the fruit can be damaged. Mid-season sustained rain can be as disastrous as a drought for fine wine grapes. Very often a vintage can move from 5 star to nothing in a blink of a storm cloud. In Ramona we have the occasional summer thunderstorm (every couple of years) but rarely do we have an early winter storm that impacts the harvest schedule. And, in California, we are allowed to use irrigation systems (very efficient drip irrigation) whenever needed. Grapes require very little water, applied judiciously, so we can get it delivered when needed, on our schedule.

So, piece of cake, right? Nothing could be easier than making Ramona a famous wine region. True, nature has supplied us with all the conditions FOR WHICH WE HAVE NO CONTROL. So no; it will not be easy. We just have the opportunity to do something special. We still have to do it: one vine, one bunch of grapes and one bottle of wine at a time.

We support Ramona Valley wine grape growers, wine and wine makers at the local (Ramona) and county (San Diego) level. This is done through community involvement, classes, and events aimed at both wine makers and wine consumers.

Throughout the past 10+ years, our association has focused on community, education, sustainable operation of vineyards and wineries, and taking a leadership role within the San Diego County wine grape industry.

Explore our site to learn more about the vines, wines, and makers that are part of the Ramona Valley Wine Region. There are events year-round that are open to the public – check back often for more information on upcoming events or connect with us on Facebook or Instagram to be sure you don’t miss out. 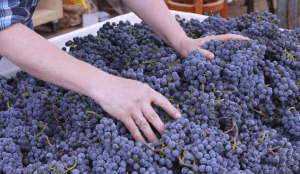 Join us for wine tasting in the heart of San Diego’s Wine Country. We’d love to meet you!