Nestled in the front range of the Pacific coastal mountains of Southern California, the Ramona Valley has a rich history of vineyards and winemaking, dating back to the early missions. Hot days and cool nights, influenced by the coastal marine layer and fog, contribute to conditions that produce quality wine grapes in the Ramona Valley. The area is a broad valley that is ringed by hills and mountains that isolate it from the surrounding areas. The valley has an average vineyard elevation of 1400 feet and an annual average rainfall of 16.5 inches.

Located approximately 35 miles NE of San Diego, the Ramona Valley American Viticultural Area was approved in January 2006 based on its unique microclimate, terroir, and history for grape production.

The following are excerpts from the January 6, 2006 press release: 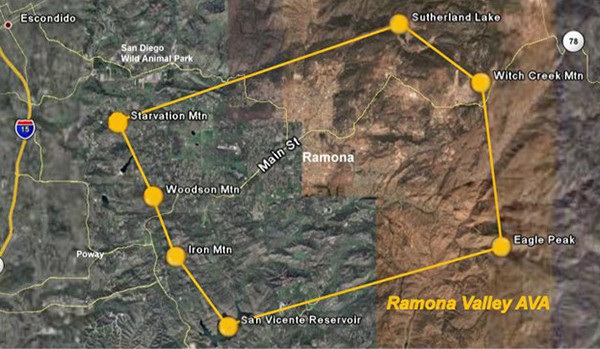 The 89,000-acre area covers 139 square miles of primarily rural area surrounding the unincorporated town of Ramona, California, located in north central San Diego County. The area is home to more than 80 commercial vineyards covering over 100 acres, and 20 bonded wineries. New vineyards and wineries are being developed within the Ramona Valley each year.

American Viticulture Area designations, or “appellations,” were first created under federal law in 1980, and the Ramona Valley is the country’s 162nd area to be granted a designation. Ramona Valley is only the second AVA to be designated in San Diego County and the third in Southern California. It is within the large South Coast AVA which covers all of Southern California south of the Santa Barbara area.