Find the business you're looking for by searching by name, or select the category you're looking for. You can filter by area of Ramona you want to visit or the varietal of wine you prefer!
Filter
Sort by: Newest First
List Grid Map

Creek Hollow Vineyard is a San Diego area Vineyard located in the heart of the Ramona Valley AVA (American Viticulture Area).  Currently, we are simple organic growers committed to producing quality grapes that are sold to some of our local award winning wineries.

We invite you to explore this emerging wine region, its beauty and where we have called home since 1989.

Storum Ranch proudly grows the most delicious tree-ripened apples, peaches and pears at the foot of the Volcan Mountain Preserve in Julian, Calif.

Our orchard was originally planted in the early 1980s with Golden Delicious and Newtown Pippin apples to supply fruit for a local pie company. Since 2010, we have carefully tended our orchard to expand the selection of apple varieties available for market and have some 30 varieties planted.

Our winery and tasting patio is permanently closed.

We will be making wine at a new winery, called Old Julian Vineyards and Winery.

More information will become available soon.
Hellanback Ranch’s award winning wines are meticulously handcrafted with a focus on quality rather than quantity. All of their wine is made from estate grown grapes or grapes from other small vineyards in the Ramona Valley AVA and the Highland Valley . Ramona Valley was designated an American Viticultural Area (AVA) in 2006.

The Ranch is nestled in a secluded canyon east of Ramona, CA. Horses, cattle, pigs, wild turkeys and many other forms of wildlife inhabit the ranch along with John York and Paula Payne and their two Dobermans. It is about a 60 minute drive from downtown San Diego, and about 10 minutes from Ramona, but it feels like the middle of nowhere.

Why do we call it “Hellanback”? When we saddled up to go riding, before we had the ranch, Paula would always ask where we were going. John would always reply, “To hell and back”. Well, they finally made it! 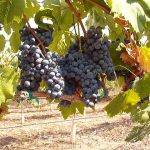 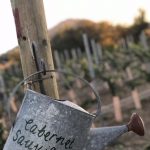 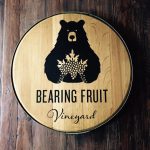 Bearing Fruit Vineyard is about the process of transforming a 4.33 acre parcel into a vineyard that produces an abundance of quality wine grapes…  Malbec (800 vines), Sangiovese (800 vines) & Petite Sirah (308 vines).

The Bearing Fruit Vineyard goal for the vines will be an emphasis on quality, minimal intervention to allow the grapes to express the “terroir”, and a hands-on approach to farming.

The vision for Bearing Fruit Vineyard is for it to be a charitable, retirement endeavor.  We will patiently await the future harvests and sale of the grapes to a local winery, or wineries.  At that point, funds from the sale of the grapes will be added to the Bearing Fruit Foundation; supplementing our other annual  / primary contributions to the charitable organization that we have recently formed.

You are invited to join us on this journey. 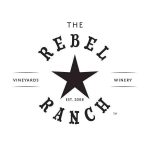 MICHAEL & MARLA FRYMAN – The Rebel Ranch was established on Leap Day 2008. While building their home themselves on the burnt-down ranch. They also put in an orchard and began raising small livestock. The idea to establish vineyards came about in 2014. And in early 2016, the first vines went in: Sangiovese and Petite Sirah.

Marla is a native-San Diegan, and Michael has lived here since he was 3. Growing up in San Diego, the couple have been local San Diego business owners since 1983. They started off as florists in the 1980’s, leasing 8 acres of land from the Ecke family to grow field flowers – adjacent to the famous Carlsbad Flower Fields, as well as also leasing acres of greenhouse space in Leucadia. Michael has always been a “farmer” at heart.

Their businesses, The Flower Corner, and Scentzz – Automated Floral Vending Machines, had over 14 floral shop locations throughout San Diego County over the decades. Michael designed and patented the first floral vending machines here. He is a General Contractor, specializing in Commercial Refrigeration (Michael Fryman Refrigeration). Michael provides refrigeration services to many local business; including the vineyards, wineries, breweries, and distilleries. In addition to running the flower shops, Marla co-owned and operated two “paint your own ceramic” studios called Cafe Clay in the 1990’s; the first in Pacific Beach, and the second location in Encinitas.

The Fryman’s needed some space to store their many desert toys and trailers, while still being centrally located for the refrigeration customers. Ramona fit the bill, “We moved to Ramona in 2008, to find some breathing room from the hustle and bustle of life ‘down the hill’. Our family called us ‘Rebels’ for moving away from urban life. Couldn’t imagine ever going back to that way of living again. And so, the Rebel Ranch was born. Ramona is our forever home!” – Marla Fryman

When the Fryman’s aren’t working in refrigeration or in the vineyard, they enjoy spending time with their family – who also live in Ramona. They especially love being “Nana and Papa” to their grandkids!

The Rebel Ranch is not open to the public just yet…stay tuned! Cheers!